Below are some Android versions you might not have known.

What Android version are you using?

-Go to settings on your phone.
-About Device.

To Check the name of your android version, tap on 'Android Version' several times under Settings in your smartphone 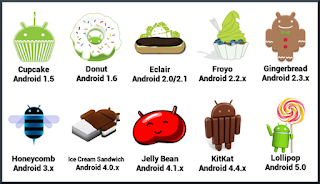 Android was not built in one day. The source of the world's dominant mobile operating system can be traced right back to the beginning of the previous decade.
We can track Android's progress as it makes it big in the mobile world, with devices like the HTC EVO, HTC Desire and Samsung Galaxy Galaxy S sweeping the OS to a dominant position.

By the end of 2013, Android came with wearables, TVs, cars and Chromebooks. Every gadgets got their own way of amazing people, for example, the Smart TV Mirroring found in all Smart TVs. This was one function which made many people buy the TVs.

March 13, 2017
Installation of Drupal 8 Sandbox Why Use the Sandbox version? If you want to give drupal a try, but you're unsure of how it'll look like or want to check how it works, the sandbox version is just for you. If you already know how to set up drupal on your lamp server, then you'll have no problem at all to set up the sandbox version. If, somehow, you can't figure it out, then you can just follow the simple steps below and you'll be there. In the steps below, we'll use Sandbox version of Drupal to generate a new issue, and patch it using Git.                    Requirements: Git Steps: Step 1: Clone it Start by opening your terminal and clone the repository by running the following the command: git clone --branch 8.x https://git.drupal.org/sandbox/bhirsch/1388780.git drupal-sandbox This command will clone drupal 8 sandbox and the all the files will be in a folder 'drupal-sandbox'. You can change the name of the f
Read more